OK, so I’ll admit it; I wrote that heading in the hope that I will find some words now that I start writing.. There are no guarantees at this stage, especially regarding the quality of said words..but, I’ll give it a whirl just the same.. [Bear with, bear with..]

So, I made it though The Break. It was a lot tougher than I thought it would be. In the past I have generally found that the beginning of a break is harder, because it is as if my body clock is telling me “today is a therapy day” and my whole being is expecting a solid fifty-minute-hour to release tension. The longer the break goes on, the less loudly my internal therapy clock ticks, because it is getting used to not having that thrice weekly outlet and is slowly finding alternative ways of managing in its absence. This time, however, was different – and I can’t really say why, because I don’t know why. If I were to venture a guess, I would say that it is to do with the fact that I am far more attached to P. than I ever was to A. [or even D.], and the longer we were apart, the more panicked I became that the connection P. and I have formed was beginning to disintegrate. I did find alternative ways of managing this time too, but it didn’t really alleviate the panic. In simple terms: I missed P. terribly – not just the service she provides, but I missed her, I missed us. And, again quite differently to past breaks, I allowed myself to admit that I was missing her. I made no attempts to try to convince myself that she’s not that important, or that it’s really just the structure of my week that I miss. And, as much as that made the break more difficult, I also know that this is real progress. This is me genuinely allowing someone in, allowing myself to become attached, taking a risk I usually wouldn’t take. So, definitely progress.

So, what did I do during my break? Well, in part I did what you could see in my previous post: tons of art. I also did some tie dying and some bleach printing and some shoe painting – all of which was very enjoyable and helped the hours and days pass in a positive way. Some samples below – feel free to scroll past, to read the rest of this post..

Tie-dye project
No children were harmed in the making of this collage! 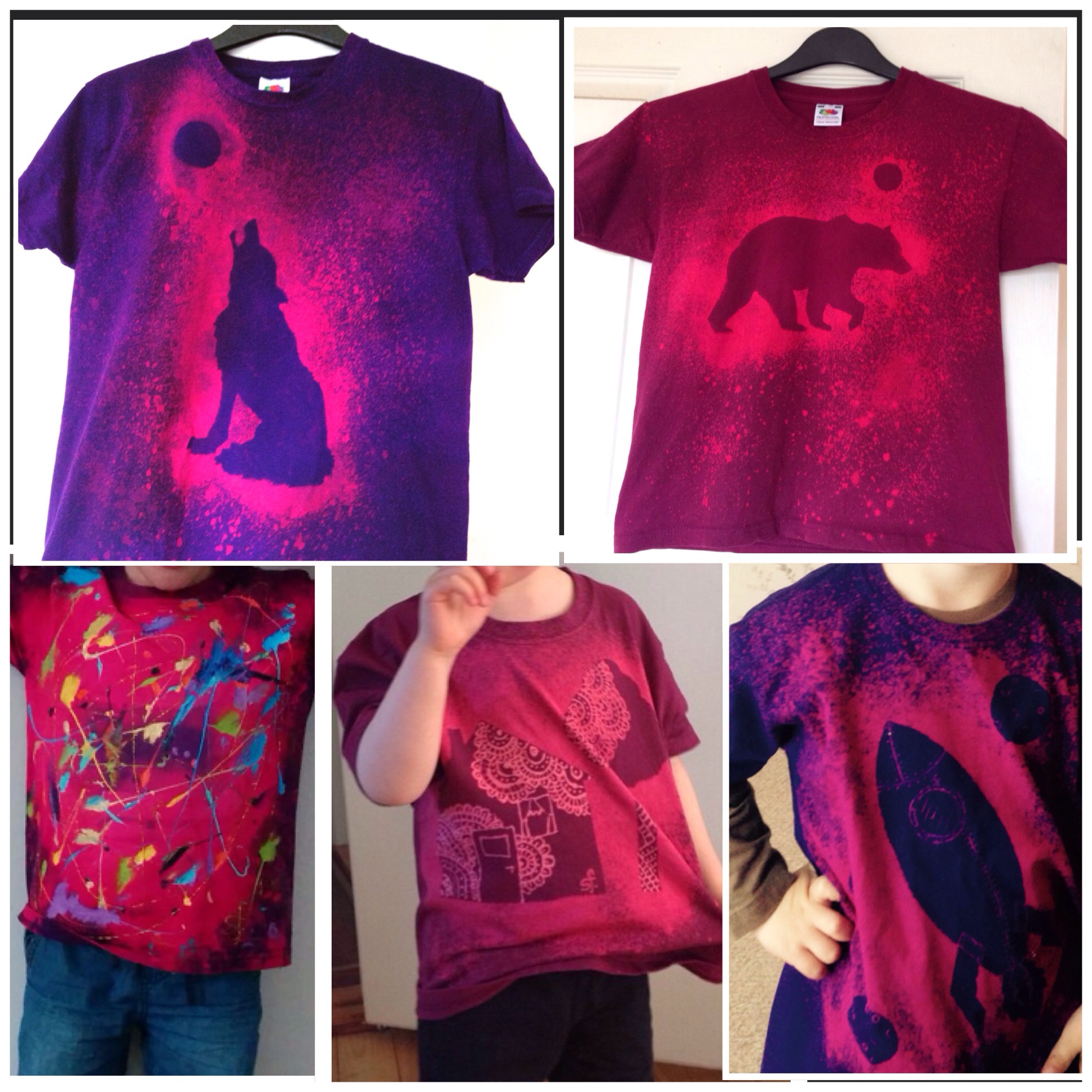 Bleach print project
Again – No children were harmed. However, one tee was a complete fail and consequently got randomly squirted with fabric paint!

Still with me? Ok. Back to the tale of “How I Survived My Therapy Break”..

So, the arty-crafty stuff definitely helped a lot, but no matter how busy I tried to keep myself there was always going to be times when I really really really missed therapy – and P. I knew this was going to happen before the break, and – again unlike other times – it was something P. and I had talked about beforehand. In the year we have been working together, forging this relationship, therapy breaks have always been very tough. They just bring out so much Stuff [paradoxically, this is also one of the reasons why breaks are useful]. At times, even weekends have been torturous, so we’ve had to come up with things to help me feel close to P. even between single sessions.

One of the things we do is that P. will lend me her pen – the one she always has in her ridiculously big handbag. This idea with the pen was actually a suggestion from one of you readers a while back, in a comment after another post about therapy breaks. This – having P.’s pen – has really been great for me; I use her pen to write in my journal, and it makes me feel a little like we are having a session. [By now I know P. well enough to be able to predict what her response might be to the things I say/write]. So, for me, a pen is great. P. did once offer to lend me one of her scarves [we are both Scarf Wearing People – it’s a thing!], but at the time that felt way too much for me, far too overwhelming, and I declined her offer. A pen, on the other hand, was just right. Small and emotionally manageable.

Apart from the pen P. has also sent me photos of herself. This has been especially useful if we have had a particularly rough session and I’ve been worried that I’ve become too much for her – because that way I can look at the photo she’s just taken and I can see for myself that she is still OK, that, in spite of the things I have told her, she hasn’t broken down or disappeared. I have also sent her a picture of me, so she can carry me with her when she is on leave. P. often uses the phrase “I carry you in my heart” and, for me, her having a photo of me, is an extension of that.

Prior to both this break and the previous one, apart from P. lending me her pen, I lent her a bottle of nail varnish. I’m very into nail art [the only sort-of girly thing about me], so her wearing/having my nail polish makes me feel more connected to her. I don’t really think that P. would forget me without these physical reminders – after all she ‘carries me in her heart‘ –  but the Little S. part of me finds this very reassuring, and since that is the part of me that generally struggles the most in P.’s absence [because she is the one who has experienced the most abandonment] it makes sense to pay extra attention to her needs. Especially when Adult Me finds it difficult to fully own those feelings herself..

Finally, the thing that probably helps me the most during breaks:  writing letters. Real, physical, handwritten, old skool letters. I let any part of me [Little S., Adult Me, bob..] write P. whenever they want, and they can decorate the letters and envelopes in any way they want, so P. can see who it is from. I will then hand deliver the letters, because that means I get to go to the place where I see P., and it’s another step towards reassuring the different parts of me that even though P. is away, our therapy space still exists. So, that is something I would really recommend.

Wow! Looks like I found rather a lot of words in the end! Hope that’s OK.

Be kind to your Selves.

"..best enjoyed with a cup of tea & a spoonful of courage.."

An honesty-focused blog about life’s twists and turns

Please be aware that this blog deals with important but sometimes difficult issues, and may therefore not be suitable for children to read on their own.

How many people have visited this site to date? "It's over 9,000!" ;) [Scroll to the bottom of the page to see the IYBTYBA verified numbers..]

All blog entries and images on this site are protected by international copyright and intellectual property laws.

What It Takes to Be Me

Previously on What It Takes To Be Me

What I Write About